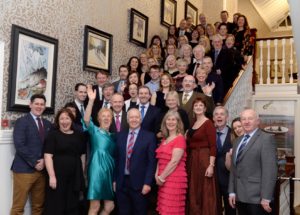 Parknasilla Resort and Spa in Kerry.

The groups reported growth of 21pc in visitor numbers across their two hotel brands. Siobhan McManamy, Director of Markets, Tourism Ireland, spoke at the event about building on tourism growth and the impact of Brexit on the industry over the coming months. Josephine O’Driscoll, Failte Ireland, spoke at the event about the opportunities for the hotels to actively get involved in the promotion of the Wild Atlantic Way, Ireland’s Ancient East, Dublin Breath of Fresh Air.

Hotel owners and management from the 55-strong organisations attended the AGM. The company was founded by Fáilte Ireland so that family run hotels could come together under one umbrella for international marketing.