Ryanair CEO Michael O’Leary is supporting Team Leo in the race for the Fine Gael leadership.

Speaking at the airline’s press conference a stone’s throw from the Dáil in the Davenport Hotel, he said that while Ryanair is non-political, he wants to see Leo Varadkar taking the helm at Fine Gael.

And he said this might surprise some, given the similarities between his background – “somebody who was born in Cork and went to Clongowes” – and that of Simon Coveney. 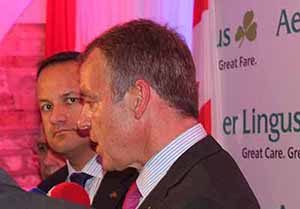 “I would strongly favour Leo Varadkar for the next leader of Fine Gael. I think Simon Coveney is an excellent candidate given that he was born in Cork and went to Clongowes, but there’s a couple of things I would point to with Leo Varadkar. He has accomplished more in his ministerial portfolios; he was in Transport, Health and currently Social Welfare, which is a little bit more challenging than Simon’s portfolios of Marine, Defence – God help us – and Agriculture.

“I think the way Leo has run the current campaign has been very impressive. They’ve both had 12 months’ notice that there’s a leadership campaign coming down the road and frankly the way Leo has organised his campaign. He seems to have it sewn up almost out of the blocks and seems to have left Simon standing somewhat.”

But Mr O’Leary doesn’t believe the next FG leader will be Taoiseach for long. “I think the country needs change and Leo represents a slightly more risky candidate. Simon’s a bit more of the old guard Blueshirts but I think there will be an election in the not too distant future, maybe the next 12 months, and Varadkar will do better against Micheal Martin than maybe Simon would.

“Simon and Micheal seems to be a bit of a local Cork scrimmage whereas at least with Leo you’re getting Dublin v Cork and as you’ve seen in football in recent years Dublin tends to do better than Cork, much to my shame and horror. So I would strongly endorse Leo. In terms of the interaction we’ve had with him – Leo was the Minister for Transport when himself and Michael Noonan pushed through the reduction in the very damaging travel tax – the Fianna Fail travel tax – which had devastated visitor numbers to Ireland in the previous three years. they rounded even stronger in the next two years.”

But Mr O’Leary did joke that his ringing endorsement could be a “kiss of death” for the former Transport Minister.

Video highlights from the conference: