Trending
You are at:Home»Aviation»Norwegian to fly Dublin Airport to Toronto Hamilton daily from next March 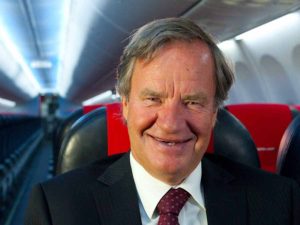 Norwegian is to launch Dublin to Toronto Hamilton daily with a B737 Max from March 31st. The 189 seats will be in a single class cabin.

Fares start from €189 one way and are available to book.
Hamilton is 50 minutes from Toronto and an hour from Buffalo New York and Niagara Falls. It was previously served from Shannon by Flyglobespan.
The surrounding area offers travellers the ‘Art Gallery of Hamilton’, housing the third largest permanent art collection in Canada, to the ‘Festival of Friends’ held in August, Canada’s largest annual free summer music spanning over three days.
This summer season Dublin Airport has flights to 195 destinations in 42 countries, operated by 56 airlines.
Bjørn Kjos,Chief Executive Officer at Norwegian said: “Today marks a milestone in Norwegian’s transatlantic expansion from Ireland as we announce the first ever direct route between Dublin and Hamilton – Toronto, this is also our first ever service between Europe and Canada. We are committed to providing Irish passengers with greater choice and lower fares across our network as we continue to invest in the Irish market. We look forward to welcoming passengers on board our new service to Canada from March 2019.”
“Norwegian will continue its summer 2018 schedule into the winter, a double daily service to Stewart, New York and daily flights to Providence, which offers access to the tourist centres of New York City, Boston and the New England area.
Norwegian is the only airline to offer free inflight WiFi on UK flights to more than 30 European destinations
The airline has one of the youngest aircraft fleets in the world with an average age of 3.7 years, including next-generation Boeing 787 Dreamliner, Boeing 737 MAX and Boeing 737-800s.”
Vincent Harrison, Managing Director at Dublin Airport said: “Dublin Airport is delighted to see Norwegian launch this new service to Hamilton – Toronto. It will be Dublin Airport’s fifth destination in Canada, offering further choice to the growing Canada-Ireland and Ireland-Canada markets and the overall transatlantic market between Dublin and North America.
Norwegian ls Europe’s third largest low-cost airline with 33m passengers each year and launched transatlantic services from Ireland in July 2017 with affordable direct flights from Dublin, Shannon and Cork to the New York and Boston areas on the US east coast.