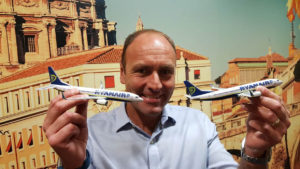 has breached the billion-passenger mark – becoming the first airline in the EU to achieve that number of total passengers. The feat came on the back of its latest figures, showing a record number carried in July.

“July was a record month for Ryanair, as we became the first European airline to carry over 12m customers in a single month, with July’s traffic growing 11pc to 12.6m customers. Our load factor jumped 1 percentage point to 97pc, on the back of lower fares and the continuing success of our “Always Getting Better” customer experience programme,” said Chief Marketing Officer Kenny Jacobs.

“In July we celebrated carrying our 1 billionth customer since our first flight in 1985 and became the first EU airline to carry over 1 billion passengers.  To mark the occasion we are launching a ‘Thanks a Billion’ seat sale, with fares slashed on over 1 million seats across our European network for travel in November and December.”

Lufthansa said passenger traffic increased by a fifth in the last quarter, and flights rose by more than 10pct.The carrier had already reported on July 17 that adjusted operating profit in the first half of the year had nearly doubled to €1.042bn, on €17bn of revenue.

“We have achieved the best first half-year result in our company’s history,” said Ulrik Svensson, Chief Financial Officer of Deutsche Lufthansa. “In addition to strong demand and a robust pricing environment, this is attributable to the fact that we achieved a further structural reduction in costs. Our hard work in cutting our costs is reaping its rewards. But we must continue these endeavors: this is the most important way that our margins can be improved sustainably.”

Both Eurowings – a director low-cost rival to Ryanair – and Brussels Airlines posted a positive result in the latest results. “All our airlines were able to improve their load factors despite raising their capacities,” Svensson added. “We are also very satisfied with the developments at Eurowings, which now has every prospect of breaking even this year – earlier than anticipated.”