Shannon Airport has welcomed Clare-based diving expert Jim Warny who took part in the heroic rescue mission for 12 Thai students and their soccer coach.
Friends of the Belgian national, who has lived in Ennis for 15 years, gathered to salute his participation in the heroic rescue that touched hearts across the globe and in which former Thai navy seal Saman Gunan died during the rescue effort.
As he walked through the arrival gates, Lufthansa engineer Jim Warny was met with a chorus of cheers. The father-of-one had an emotional reunion with fiancee Asia Mania, his dad Rene Warny and members of the Irish Cave Rescue Organisation. 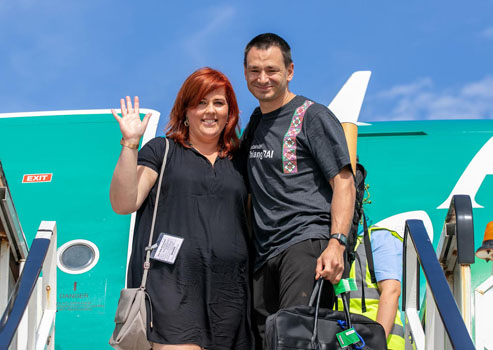 Diver Jim Warny being greeted by his fiance Asia Mania after he landed in Shannon Airport, July 13.Photo: Arthur Ellis.

Mr Warmy was one of an elite, 19 member multi-national group of divers drafted into assist in the unprecedented rescue mission due to his extensive caving knowledge.
An emotional Mr Warny said he was relieved to be home. “I am very happy to be back with my family, my fiancee and my dad. I know they have been worried.
“I am very fortunate to have been able to do this. The true heroes are those boys who have endured way more.”
Asia Mania said she was “very happy” to have her fiancee home. “I was worried for him but he is so good at what he does. He goes caving and diving constantly and I have complete trust in him, he is the best.”
Mr Warny’s dad Rene, also paid tribute to his son. “I am very proud of him and there is someone up, his mother, in heaven who is very proud of him too.”
Shannon Airport Managing Director Andrew Murphy said:  “We’ve had many great homecomings here; in recent years the likes of John Burke after his successful assault on Everest and Andy Lee after winning his world title. But Jim Warny, by virtue of what he did this week in helping save the lives of these young boys is right up there amongst the most heroic we have welcomed back here over the years.
“This was a rescue that captured world attention. We could even see that from people coming through the airport, stopping to watch bulletins on it on the TV in our lounge. Save for the tragic death of the Thai navy diver Saman Gunan who lost his life during the rescue programme, a death that no doubt hit Jim and his colleagues hard, the outcome in Thailand was beyond what most could have expected.
“To have someone living here in Clare, in the west of Ireland, involved in this is an incredible source of pride for us all and it’s only right we would have afforded him this welcome.”
The following two tabs change content below.