Stobart Air, the regional franchise flying partner to Flybe and BA Cityflyer, has delivered 10m passengers on regional routes under its franchise partnership with Aer Lingus.

Since its first Cork-Glasgow flight in March 2010, Stobart Air has invested over €170m on a fleet renewal programme, including the addition of a new ATR42-600 aircraft at a cost of €14m to service the Public Service Obligation (PSO) routes. 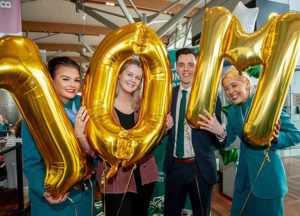 The airline recently renewed its contract to operate the PSO routes connecting Kerry and Donegal to Dublin and beyond. Over 8,000 people flew on these routes in October, representing a 20pc increase in traffic on last year. Over 80,000 passengers have flown domestically within Ireland since the beginning of 2018.

Since 2010, services under the franchise agreement have more than doubled, increasing from 12 to 25 regional routes across Dublin, Cork, Shannon, Kerry and Donegal, operating more than 22,000 flights.

The franchise agreement it has with Aer Lingus expires in 2022, and Stobart has been seeking to have that  extended by a further three years. Its franchise deal with Flybe is due to expire in 2020. announced, Stobart Air announced last month that it is to operate routes from London-City airport on behalf of BA CityFlyer

More than 500,000 passengers have connected to Aer Lingus long-haul services at Dublin and Shannon since 2010 from Aer Lingus Regional services.

Graeme Buchanan, Managing Director of Stobart Air, said: “We operate across some of the busiest and most popular routes, positioning Ireland as an international transatlantic travel hub. This is a key part of our growth strategy.”