Trending
You are at:Home»Ireland inbound»Taoiseach makes final push for Irish tourism as one in 10 Americans visit Ireland

In one of his last away visits as Taoiseach, Enda Kenny supported Tourism Ireland on its latest mission to Chicago, meeting leading tour operators, airlines and meetings and incentive travel planners in the city who actively sell Ireland for both leisure and business travel.

Outbound travel from the US to the island of Ireland has grown faster than to many of competitor destinations – and over one in ten American travellers to Europe now visits Ireland.

Niall Gibbons, CEO of Tourism Ireland, said: “In 2016, we welcomed a record 1.6m North American visitors to the island of Ireland, worth over €1.3bn to our economy. Tourism Ireland has prioritised North America for 2017, as a market which offers a strong return on investment, in terms of holiday visitors and expenditure. A number of factors are working in our favour, including more airline seats than ever before, from 20 gateway cities across North America to the island of Ireland, with numerous new flights and expanded services in the pipeline for this year, including from Chicago.” 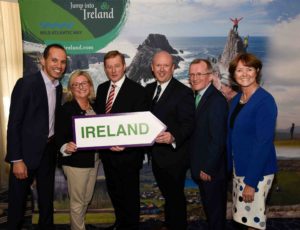 Alison Metcalfe, Tourism Ireland’s Head of North America, said: “We have seen superb growth in North American visitor numbers so far again this year, with the most recent CSO figures for February to April 2017 showing growth of almost +26% – an extra 73,100 North American visitors compared with the same three-month period last year. Tourism Ireland is undertaking an extensive programme of targeted promotional activity to keep the momentum going and build on that growth.”

Tourism Ireland’s US programme kicked off with a national TV campaign this spring (Tourism Ireland’s first national TV campaign in the US in over seven years), reaching an estimated 255m potential American holidaymakers. Our important ‘culturally curious’ and ‘social energiser’ audiences are being targeted with distinctive vacation experiences, events and special offers tailored to their interests.

Tourism Ireland is creating ‘stand out’ for the island of Ireland in the US, highlighting experiences like the Wild Atlantic Way, the Causeway Coastal Route, Ireland’s Ancient East, Belfast and Dublin. Screen tourism also remains a priority, as the organisation continues to capitalise on our connections with Star Wars and Game of Thrones. Promotions are helping grow travel to the regions of Ireland, during the shoulder and off-peak seasons.