Trending
You are at:Home»Aviation»First aviation casualty of 2019: Germania files for bankruptcy with 9 of its 30 aircraft leased from Ireland 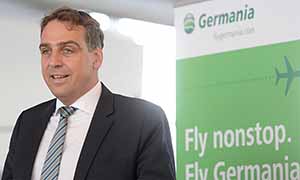 Germania declared bankruptcy and ceased operations overnight on Monday February 4 2019. The Swiss and Bulgarian subsidiaries survived to fly another day.

It was reported last month that the airline had suffered heavy losses in recent years, especially during 2018 and that its owners are seeking potential buyers for the airline. On January 31, it was reported that payment of employee salaries would be delayed. Germania eventually ceased flight operations without previous notice overnight from February 4 to 5 2019 and declared bankruptcy for itself and its technical and service divisions excluding Germania Flug in Switzerland. The airline was delisted from GDA at 2.40 on the evening of February 4. Talks aimed at securing finance with Joachim Hunold, Udo Stern and Jörn Hellwig failed at 1am. The final scheduled flight to be in the air was ST 3711 from Fuerteventura to Nuremberg which landed on 5th February at 01:11 AM.

Originally focused on charter operations, in recent years Germania had moved towards becoming a scheduled carrier, although some charter flights were still flown under the brand. Germania offered chartered flights from German airports and scheduled flights to Armenia, Turkey, Kosovo, Israel and Lebanon. The airline has a fleet of 30 aircraft, nine of which were leased our of Ireland: 19 Airbus A319-100 (one each leased from Aercap, Amemtum, Avolon, AWAS, BOC, Gecas and Pembroke), six Airbus A321-200 (one each leased from Apollo and GECAS) and five Boeing 737-500.

Full statement: Germania Fluggesellschaft mbH, its sister maintenance company Germania Technik Brandenburg GmbH as well as Germania Flugdienste GmbH filed for insolvency at Amtsgericht Berlin-Charlottenburg on Monday, February 4, 2019. Flight operations will be terminated in the night from February 4 to February 5. Germania’s employees have been informed. Swiss airline Germania Flug AG and Bulgarian Eagle are not affected by this step.

Karsten Balke, CEO Germania Fluggesellschaft mbH, said: “Unfortunately, we were ultimately unable to bring our financing efforts to cover a short-term liquidity need to a positive conclusion. We very much regret that consequently, our only option was to file for insolvency. It is of course the impact that this step will have on our employees that we regret the most. All of them as a team always did their best to secure reliable and stable flight operations – even in the stressful weeks behind us. I would like to thank all of them from the bottom of my heart. I apologise to our passengers who now cannot take their Germania flight as planned.”

Those Passengers affected by the suspension of flight operations who booked their Germania flight as part of a package holiday can contact their respective tour operator in order to organize substitute carriage. For passengers who have booked directly with Germania, there is unfortunately no entitlement to substitute carriage.

Germania’s short-term liquidity need emerged mainly due to unforeseeable events such as massive increases in fuel prices last summer and the simultaneous weakening of the euro against the US dollar, considerable delays in phasing aircraft into the fleet and an unusually high number of maintenance events that the airline’s aircraft required were major burdens for the company.

Germania is an independent German airline with a history that goes back more than 30 years. The airline with the green and white logo carries more than 4 million passengers per year on short-haul and medium-haul flights. Germania offers connections from 18 departure airports in Europe to over 60 destinations within the continent, in North Africa and the Middle East. Reversing the common industry trend, Germania continues to offer complimentary snacks, soft drinks, magazines and a minimum of 20 kg free baggage allowance. Germania’s business model combines scheduled, charter and ad-hoc flights. Together with Bulgarian Eagle and the Swiss airline Germania Flug AG, Germania operates a fleet of currently 37 aircraft. Germania Technik Brandenburg GmbH is responsible for the company’s aircraft maintenance. www.flygermania.com