Trending
You are at:Home»Travel Trade News»Governor’s war of words as state passes bill that threatens future of Visit Florida

The Sunshine State’s travel industry has failed in a bid to thwart a bill that would end state funding for tourism marketing at Visit Florida.

The bill passed on a 10-5 vote in the state’s assembly in front of a packed room with more than 150 speakers. Visit Florida, the state’s tourism marketing group that received $76m in funding this year, will be eliminated under the bill, the Orlando Sentinel reported. 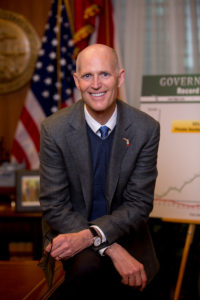 Tourism industry supporters stressed that small businesses, not heavyweights such as Disney World and Universal Studios in Orlando, would lose out if Visit Florida is shut down. The marketing organisation is a familiar face on the Irish travel scene, hosting lunches in Ireland at events at the World Travel Market in London and IPW in the United States.

Bill sponsor Paul Renner, Palm Coast, said he wants to remove specialised subsidies for favoured industries such as tourism and focus on cutting taxes for all businesses.

Governor Rick Scott, who has consistently named funding for Visit Florida among his top goals each year, tweeted his frustration. “Politicians in [the Florida House] turned their back on jobs today by supporting job killing legislation,” Scott posted.

Scott has successfully campaigned for increases in Visit Florida’s budget, from $34m in 2011 to $74m in 2015. However, Florida House Speaker Richard Corcoran, who supported the bill to withdraw funding, claimed the money was wasted. “Spending more taxpayer money on VISIT FL (or less) has not demonstrated a direct impact on tourism,” he tweeted earlier this week

He also highlighted figures that showed that between 2011-2015, when Visit Florida funding rose 112pc, visitor numbers rose only 22pc.