Trending
You are at:Home»Afloat»Irish Ferries cancels all summer sailings on WB Yeats over latest delay at shipyard

Irish Ferries has cancelled all summer sailings to France by new ship WB Yeats due to the latest delay at German shipbuilder Flensburger Schiffbau-Gesellschaft & Co.KG.

It said the cancellations were caused by “to extraordinary circumstances” beyond its control at FSG.

The ship, which was due to start sailing from Ireland to France on July 30, is now likely to commence sailing with Irish Ferries on Dublin/Holyhead as scheduled in September, Irish Ferries said. 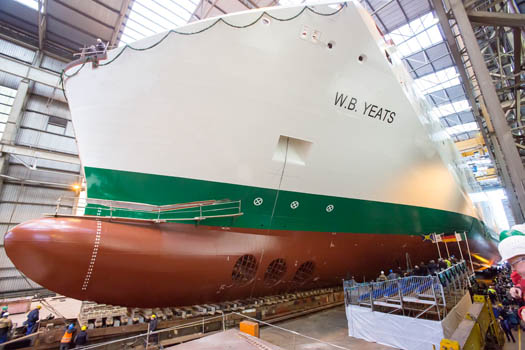 The company said has been is in contact with affected customers to inform them of the cancellations, offer them alternative travel options, and apologise for the disruption to their travel arrangements.

Approximately 6,000 bookings will be affected, and customers affected are being offered alternative travel options, including alternative direct sailings on the Oscar Wilde, or a landbridge option via England.

Irish Ferries was previously forced to cancel July sailings for the WB Yeats when informed in April by FSG of the first delay.  Approximately 2,500 bookings were affected then, but 95pc of customers chose to switch to Irish Ferries’ other cruise ferry, the Oscar Wilde.

Irish Ferries said it “very much regrets the inconvenience these cancellations cause our customers and hopes that as many as possible will choose to be accommodated via the company’s alternative arrangements and continue with their holiday plans. As valued customers of Irish Ferries, we are offering each affected customer a €150 voucher which can be used on any of our Ireland-France routes next year.”

John Spollen, President of the ITAA, said the announcement “is extremely disappointing and will pose major disruptions to many Irish holidaymakers. Six thousand bookings, that is 6,000 family holidays, have been affected by this announcement.
“I do appreciate that Irish Ferries have offered alternative travel arrangements for all bookings but mid June is extremely late to make this announcement. Families have accommodation booked for set dates that may be difficult to change to accommodate new travel dates. This will lead to Irish visitors incurring extra costs and disruption to their holiday plans.”
He added: “Our members are disappointed by the deferral of the launch of the WB Yeats. This delay has a massive impact on our customers who had planned to travel to France on Irish Ferries new service this summer.
“I suggest holiday makers who have been affected by this contact their travel agent with whom they made their original booking with.”

Irish Ferries has contacted customers directly, however, any customers who wish to contact it can call +353 (0) 818 300 400 or email customersupport@irishferries.com.