Trending
You are at:Home»Ireland inbound»ITIC says six of 51 recommendations have been achieved, 13 showing no progress 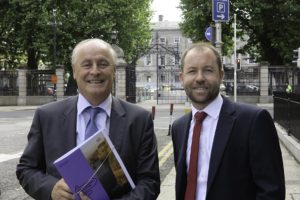 The Irish Tourism Industry Confederation six month progress update on its eight year growth roadmap says that progress is being made on six issues, 32 issues are at a standstill and 13 are showing no progress or getting worse.

In a highly unusual press conference, ITIC promised to further update their Tourism: An Industry Strategy for Growth to 2025 on a regular basis.

The policy recommendations that have already been achieved include the development of a brand for Ireland’s Midlands and Shannon corridor, Ireland’s Hidden Heartlands; the launch of a national Greenways strategy to include at least one coast-to-coast Greenway; and a root and branch review of the British market.

ITIC’s six month progress update monitors and reviews the progress of 10 themes in the 2025 Strategy. Brexit is a major issue for Irish tourism with 39pc of all international visitors coming from Britain. ITIC has quantified that a hard Brexit will cost Irish tourism at least €260m in its immediate aftermath and criticises the Government for not funding a tourism Brexit-mitigation plan.

The ITIC 2025 Strategy estimated that earnings from overseas tourism can increase by 65pc to €8.1bn annually by 2025 if the right policies and investment strategies are adopted and pursued. This would mean 80,000 more jobs nation-wide and an increase to the exchequer in direct tourism-related taxes of just under €2bn annually from overseas tourism.

Their update shows that growth continues  up 8pc year to date in 2018 and the tourism industry is adding significant capacity increases in both hotel developments and air and sea access in the coming years. Despite tourism’s current success however, there are significant challenges with Brexit a major concern to the industry who urge pro-tourism enabling policies from the Government.

ITIC highlighted the importance of retaining the 9pc Vat rate and advocates that €50m more per annum should be committed to tourism state agencies to increase overseas marketing and industry supports.

The Irish Tourism Industry Confederation was founded in 1984 and is the umbrella group representing the leading tourism interests in Ireland. They say tourism is:

Maurice Pratt, Chairman of ITIC said: “Irish tourism is Ireland’s largest indigenous industry, employing 254,000 people nationwide, and is at a key juncture. Correct actions need to be taken now to ensure that the sector’s significant potential is to be achieved. The Irish tourism industry is confident of future growth and it estimates that the inbound tourism business from overseas visitors to our shores can grow by 65pc, to €8.1bn, by 2025. This is significantly more that the national tourism policy target which is €5bn for the same period. The Government must match the industry’s ambitions and commit appropriate funds to overseas marketing and new product development so that tourism can realise its potential for the country.”

Ruth Andrews, Deputy Chair of ITIC, says: “Tourism is the main regional employer throughout the country. It is too important a sector to take for granted. In that regard industry, state agencies and Government must work closely together to ensure pro-tourism policies are pursued.” Andrews highlights that the tourism industry committed nearly €100m in the last year in marketing Ireland overseas and will spend €2.5bn in new capital developments over the coming 3 years. She says: “The Government too must play its part and restore tourism budgets so the sector can withstand the upcoming Brexit shock and continue to provide regional balance and growth. There is a 34:1 return on Government investment in tourism – it should be clear that the economic argument for supporting Ireland’s largest indigenous industry is compelling.”

ITIC CEO, Eoghan O’Mara Walsh, said tthe retention of competitiveness remains vital if Irish tourism is to continue to grow: “Irish tourism must retain its competitiveness and ensure that we continue to offer tourists good value for money. There is an onus on both the industry and the Government to manage costs accordingly. In this regard maintaining the 9pc tourism VAT rate is critical – with Brexit looming the last thing the sector needs is an increased VAT rate which would depress demand, damage the sector, and hit regional Ireland particularly hard.”