Trending
You are at:Home»Ireland inbound»Kerry leads the way as record number of beaches plant Blue Flags
A record 90 beaches and marinas have achieved Blue Flag status, up from 88 last year. And the county with the most is Kerry; 13 beaches and one marina.
Blue Flag began in Ireland in 1988 with 19 beaches and two marinas, with 81 beaches and seven marinas in the scheme last year. Ardmore in Waterford has achieved Blue Flag Status for the first time since 1997, due in part to improved bathing water quality brought about by the completion of a new waste water treatment plant. Carne in Wexford got a Blue Flag for the first time ever. 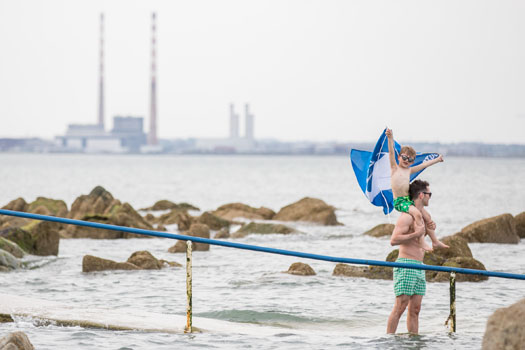 Simon Matthews and son Jasper (5) marking An Taisce’s announcement of the International Blue Flag and Green Coast award recipients for 2018 at Seapoint,Co Dublin, which has retained its Blue Flag. Photo: Naoise Culhane

Each year Blue Flag status – one of the world’s most recognised environmental labels – is awarded to over 4000 beaches and marinas in 49 countries which meet strict water quality, information, facilities and safety rules. The scheme is administered here by An Taise.
“Today high number of awards reflects the great efforts made by local authorities, An Taisce, local coastal communities and other volunteers on the ground,” Housing, Planning and Local Government Minister Eoghan Murphy said.
See also  Sligo Park Hotel becomes No.1 Sligo hotel on TripAdvisor
Another 59 beaches received Green Coast Awards, including two for the first time – Sherkin Island’s Silver Strand in Cork, and Inishturk in Mayo. The Green Coast awards go to locations which don’t have the facilities for Blue Flag status but are recognised for their cleanliness, excellent water quality and natural beauty.
Four areas lost their Green Coast award due to water quality issues – Mornington in Meath, Port Arthur in Donegal, Waterville in Kerry and Kilfarrassey in Waterford.
See more pictures here or connect to the album on Facebook
The following two tabs change content below.