Taoiseach Enda Kenny raised Ireland’s tourism links with Spain after holding talks in Madrid with Prime Minister Mariano Rajoy on the implications of Brexit for Ireland.

Spain is the first European capital Mr Kenny has visited this year ahead of the opening of the divorce negotiations between the EU and Britain.

During his visit Mr Kenny met with Tourism Ireland staff, as well as leading Spanish tour operators and airlines who sell holidays to Ireland.

Tourism Ireland is targeting growth of 4pc in Spanish visitors to Ireland this year, on the back of a significant increase in the number of direct flights to Ireland over the past few years and with Spaniards consistently ranking Ireland in their ‘top ten’ destinations to visit. 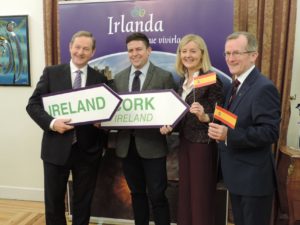 More than one in five of all Spanish visitors arrive in the fourth-quarter off-season.

Niall Gibbons, CEO of Tourism Ireland, said: “2016 is set to be the best year ever for Spanish visitor numbers to Ireland, with the latest CSO figures showing growth of over 12pc for the January to September period. Tourism Ireland will roll out an extensive programme of promotional activity once again throughout 2017. We will work closely with our tourism partners – at home and in Spain – to build on the growth of the past few years.”