Titanic Belfast is in line for 832,000 visitors in 2018 after attracting its five millionth visitor, Rita Lynch, and its busiest first two quarters of a year. Numbers visiting the Belfast attraction rose by 8pc on last year this spring and summer,  specifically from international markets, including North America, mainland Europe and China. 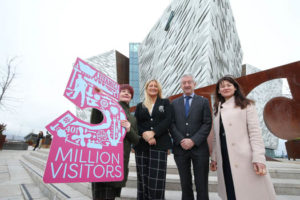 Titanic Belfast Chief Executive, Judith Owens, said: “Thanks to our staff, local and trade support, we continue to go from strength to strength and our appeal grows nationally and internationally. We are proud to see how popular Belfast and Northern Ireland is becoming as a tourist destination, as well as the enduring worldwide appeal of the Titanic story.”

John McGrillen, Tourism NI’s Chief Executive, said: “At Tourism NI, we are proud of the key role we played in the development of Titanic Belfast. It has been a catalyst for wider economic growth in Belfast and has truly changed Northern Ireland’s tourism footprint. 2017 was another record year for tourism as we welcomed almost 5 million visitors to Northern Ireland and signs for 2018 bode well.”

Kerrie Sweeney, Chief Executive of Titanic Foundation Limited, the charity that owns the iconic building, said, “Titanic Belfast has surpassed all expectations as a driver for Northern Ireland tourism.  More importantly, it continues to play a special role in preserving a significant part of Belfast’s maritime heritage, keeping the Titanic story alive for future generations in an innovative way.”