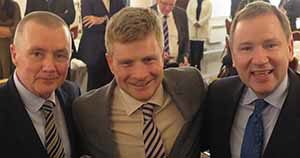 Aer Lingus operating profit for 2018 was a record €305m, up 13.8pc (€37m on last year). Capacity was up 10.0pc from additional flying to new routes such as Philadelphia and Seattle.

Aer Lingus reported increases of 20.9pc in fuel and emissions charges, 8.1pc in employee costs and 2.7pc in supplier costs.

Speaking to Brian Finn on RTE Morning Ireland Willie Walsh said “everybody can be relaxed about what will happen to aviation in the short term.” He said the new 2019 routes were performing strongly particularly Seattle which ‘reflects the investment in Ireland.” He said the decision by index provider MSCI to delete BA stock from its Spanish index had nothing to do with Brexit.

Traders said the deletion was due to the cap on foreign ownership of the shares, which came in on Feb 11 ahead of Britain’s exit from the European Union. Walsh said it was an ownership requirement which was unique to the aviation industry.

“Aer Lingus began 2019 a step closer to our goal of being the leading value carrier across the North Atlantic with the unveiling of our brand refresh in January – bringing a new look to a contemporary, international, value driven and guest-focused airline. This builds on successful growth in 2018 and demonstrates our commitment to deliver greater connectivity combined with excellent service across more North American routes than ever before. Our ambition for the future is underpinned by a profitable, sustainable short-haul network supported by our guest-focused brand and digitally-enabled value proposition. Today’s results demonstrate our ability to grow profitably and sustainably. Our model has delivered growth in our business, boosted traffic, created new jobs and driven tourism growth, particularly from North America over the past number of years.

The results are underpinned by the company’s focus on cost efficiency and productivity.  Value for money is at the heart of our business and continuing our focus on cost efficiency and productivity enables us to offer that value for money to our guests. We will therefore continue to challenge ourselves to identify opportunities to improve our competitiveness. The challenges being experienced in the wider industry underscore the imperative to focus on improved competitiveness.

With a record 2.59 million seats between Ireland and North America in 2019, we have almost doubled our North American transatlantic capacity from Dublin over the past five years.  Growth at Aer Lingus has had a very positive impact on the wider Irish economy through tourism with more North American visitors coming to Ireland, bringing over €1.5 billion into the country (source Failte Ireland 2013-17).

We continue to invest in new aircraft to underpin our expansion, and of course in our people with hundreds of new Cabin Crew, Pilot and Ground positions created to keep pace with new aircraft and new routes.

In January we revealed a contemporary, refreshed Aer Lingus brand, befitting an international airline. Aligned with all of our recent product and guest experience enhancements; the new Aer Lingus Business Class; WiFi on our A330 Transatlantic fleet; our new website and mobile app; automated check-in and bag drop experience at Dublin airport, to name just a few, we believe we have created a brand refresh that actively boosts our ambition to be the leading value carrier to North America.

Last September, we published a report commissioned from EY DKM into the strong opportunity for Ireland of advancing Dublin as a hub airport. The report concluded that investment in hub infrastructure at Dublin Airport could add €18.6bn to Ireland’s GDP over the next 15 years, as well as generating close to 34,000 jobs in the Irish economy.  The bulk of the jobs would be in the tourism sector, with the remainder coming from our own sector and other indirect supporting jobs.  According to EY DKM report, Dublin Airport already ticks a number of boxes that support its development as an international hub including the strong list of network carriers already operating at the airport, its large short and long haul route network, and Ireland’s unique geographic advantage which facilitates services on Transatlantic routes.  The existence of US Pre-Clearance at Dublin Airport was also singled out as a unique advantage. Dublin Airport has published progressive plans for the development of appropriate infrastructure at the airport and the implementation of those plans and delivery of hub infrastructure will facilitate our exciting growth ambitions. Our new aircraft, the Airbus A321 NEO LR, will begin arriving this year and will open new North Atlantic growth opportunities for Aer Lingus.

Our success in 2018 is the result of our value model, based on the pillars of cost, product and service which continues to deliver. Our fuel hedging advantage was also a key contributing factor. In order to safeguard our continued success, this year will see investment in new aircraft, new uniforms, new facilities, and new people. We are committed to delivering the best value for money for our guests, and delivering sustainable growth, thus safeguarding jobs, for our 4,800 colleagues and generating new employment. Aer Lingus continues to make progress on our ambitious growth strategy.