Trending
You are at:Home»Aviation»Etihad confirms cutbacks amid downturn

Etihad Airways, which has confirmed it is cutting costs amid the backdrop of an economic downturn in aviation, has yet to reveal where jobs will be shed.
The airline, which flies double daily from Dublin to its Abu Dhabi base, 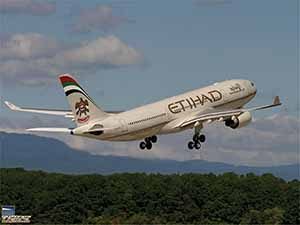 has not issued specific figures regarding cuts. However, Bloomberg has reported that around 1,000, and up to 3,000, positions could be affected.
Bloomberg said some staff have already left the IT department, while reductions are rumoured in human resources, commercial sales, cabin crew and ground staff.
Etihad, which competes with the rival Emirates Group in Dublin, also faces the looming challenge of Qatar Airways, which has announced it will fly from Ireland to Doha next year.
Fast-growing Etihad almost tripled its staff to 20,292 in the past eight years, but net income for Middle Eastern carriers is forecast to drop from the $900m expected this year to just $300m in 2017, the International Air Transport Association said recently.
Etihad here said today: “To ensure we remain agile and competitive in this environment, we constantly explore and pursue new ways of driving productivity and improving efficiency so that we can continue to deliver on our mandate and vision.This involves an ongoing process of organisational reviews and restructuring in different parts of the business in order to reduce costs and improve productivity and revenue.
“By undertaking a process of managed, controlled restructuring we are able to protect the business while at the same time continuing to invest in its future growth and progress.The restructuring will also result in a measured reduction of headcount in some parts of the business.
“We will do this in a fair, structured and transparent way while keeping a clear focus on operating the airline with the highest levels of safety, serving our guests and delivering the world-class service for which we are known.
“Etihad Airways is committed to supporting its staff through this restructuring and we aim to maximise redeployment opportunities within the group. At each stage of the process we will ensure that open and transparent information is available to all staff involved.”
The following two tabs change content below.