Trending
You are at:Home»Aviation»Aer Lingus to beef up transatlantic offering with seven Airbus 321neo LR planes

Aer Lingus is to acquire seven Airbus 321neo LR planes to service its growing transatlantic network, International Airlines Group (IAG) has revealed. The leased aircraft will be delivered in 2019 and 2020 and will be used mainly to replace existing Aer Lingus long haul aircraft. IAG confirmed that the new aircraft will be used on routes such as Washington DC, where Aer Lingus uses Boeing 757 aircraft. The DC route is currently operated for the airline by Dublin-based aviation partners ASL. 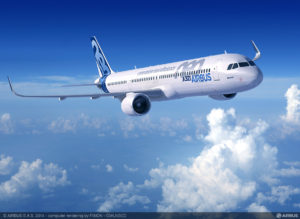 Willie Walsh, IAG’s chief executive, said: “The introduction of these aircraft on our transatlantic network will enable Aer Lingus to operate more frequent flights on routes between Dublin and the US East Coast. This will provide additional flexibility for connecting passengers and will strengthen Dublin as the Aer Lingus transatlantic hub.”

IAG said the “A321neo LR will be the most cost efficient long-range narrow body aircraft and will be fitted with a total of 186 seats in Business and Economy cabins”, adding that “this modern, fuel efficient aircraft will also bring environmental benefits to the airline”

The existing 757s have a capacity for 177 seats – 12 in Business and 165 in Economy. The A321LR – a new variant of Airbus’ A321neo will have the longest range of any single-aisle jetliner, able to fly routes of up to 4,000 nautical miles. Airbus said it is ideally suited to transatlantic routes, and enables airlines to tap into new long-haul markets that were not previously accessible with current single-aisle aircraft.