Trending
You are at:Home»Aviation»Not decided whether Cityjet and Stobart will remain separate after takeover of former Aer Arann 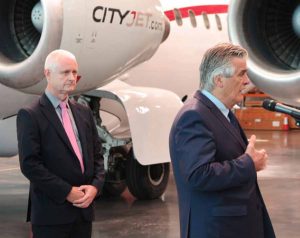 Pat Byrne (speaking, on right) and Cathal McConnell of Cityjet

It has not yet been decided whether Stobart Air and CityJet will operate as two separate entities for at least the time being when the €80m sale of Stobart to CityJet enters endgame next month.

Cityjet have secured backing from investment company Falko, which financed Cityjet’s acquisition of new Sukhoi Superjet aircraft and is supported by affiliates of funds managed by Fortress Investment Group.

CityJet, headed up once again by founder Pat Byrne, is preparing to base aircraft at London Southend Airport, which is owned by Stobart Group.

The deal will be structured that will see Stobart Air acquire the shareholdings of existing investors and the separate leasing firm that acts as a holding company for some of the airline’s fleet.

Aer Lingus has given its approval for the takeover by CityJet, which safeguards the Aer Lingus Regional Service under a franchise agreement with Aer Lingus. Stobart Air also operates some services for Flybe.

Stobart was previously known as Aer Arann, and was acquired out of Examinership by the Stobart Group and its investment partners., which had been among the backers of the original Aer Arann back in 1972.

The sale of Stobart was provoked by the decision of once of these partners, Invesco, to exit the aviation business last year.

CityJet has taken delivery of a number of new Bombardier CRJ900 aircraft. They are being used by CityJet’s Blue1 subsidiary, which operates regional routes on behalf of Scandinavian carrier SAS.