Trending
You are at:Home»Aviation»Confirmed: Christophe Mueller is on his way to Emirates 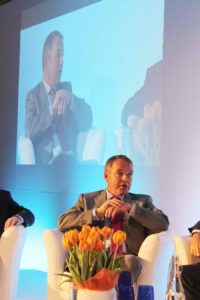 Following months of speculation, Emirates have confirmed that ex-Aer Lingus CEO Christophe Mueller is joining the airline on September 20 as chief digital and innovation officer.

It is believed that he is being lined up to replace the 66-year-old Tim Clarke as Chairman of the airline. Mueller turns 55 in December.

Speaking to Travel Extra in June, the Howth-domiciled Mr Mueller did not confirm the Emirates move but said he was planning to remain in the aviation business.

Mueller is an accountant who graduated in 1988 from the University of Cologne with an MBA and subsequently completed an Advanced Management Program at Harvard Business School in 1999. 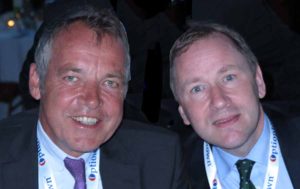 Christophe Mueller of Air Malaysia and former CEO of Aer LIngus with Stephen Kavanagh CEO of Aer Lingus at the IATA gala dinner in the RDS Dublin, June 1 2016

He joined  Lufthansa as a financial analyst in the internal audit department in 1989, and was a financial controller with Daimler-Benz Aerospace from 1991 to 1994  where he implemented restructuring programmes in the subsidiaries Elbe Flugzeugwerke, Dresden, Dornier and Fokker in Amsterdam.

He re-joined Lufthansa as Senior Vice President Finance in 1994 and became Executive Vice President in Corporate Planning and Network Management. In 1999, he joined Belgian airline Sabena as CEO. Following the September 11 attacks and the subsequent downturn in the airline industry, the company filed for bankruptcy in 2001. He later told Travel Extra that Sabena’s demise had such an effect on the Belgian economy that it was a mistake that the airline was allowed to fail.

Mueller was behind the foundation of  Brussels Airlines where he remained Chairman until 2002. He later served as the chief financial officer of DHL Worldwide where he was responsible for the successful turnaround programme which led to an improved bottom line of USD300m within a year and moved to the charter side of the business as Executive Aviation Director at Tui Travel, a FTSE 100 company, where he restructured the entire lease portfolio and order book of seven airlines with a total fleet of 170 aircraft.

He became CEO of Aer Lingus in 2009 and moved away form competition with Ryanair, something he described as a “me too airline” strategy, to build a trans-Atlantic service that was fed by Aer Lingus’s short haul network. He was appointed to the board of Tourism Ireland and as chairman of An Post.

He becasme CEO of Malaysia Airlines in 2015 in the aftermath of the MH370 and MH17 disasters and subsequently announced 6000 job cuts, roughly a third of the workforce.

Mueller was previously President of IATA, the international Air Carrier Association in Brussels and Chairman of the Advisory Board of Eurocontrol. He has served as a Non Executive Director in multiple companies amongst others, LOT, Luxair, Lauda Air, Tuifly and Hapag-Lloyd Shipping.