A Hard Brexit could cost Irish tourism €390m as competitiveness weakens, the Irish Tourism Industry Confederation claimed. Speaking at the ITIC AGM, incoming Ruth Andrews, who replaces Maurice Pratt as Chairperson of the industry body, said the Government must take the potential of tourism in Ireland much more seriously.

“The national tourism targets for 2025 have already been met as the industry has delivered really strong growth in recent years. It is high time that the Government matched the industry’s ambitions which estimate potential growth of 65pc with 80,000 further jobs over the next seven years,” Ruth Andrews said. 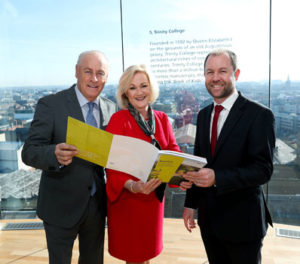 Ms Andrews, who begins a two-year term as Chair, alongside the DAA’s Cormac O’Connell who becomes Deputy Chair, said tourism was at a key juncture and pro-tourism policies were vital: “The extra investment in Budget 2019 only brought tourism budgets back to 2008 levels – that’s been a long decade of under-investment.”

The Chief Executive of ITIC, Eoghan O’Mara Walsh, said: “Tourism is worth over €9bn annually to the Irish economy and nearly 10m international visitors came to our shores last year. The industry’s competitiveness though has been seriously weakened by the Government’s decision to hike the tourism Vat rate by 50pc and unsustainable business costs increases for SMEs which are the backbone of the sector.”

Mr O’Mara Walsh pointed out that Fáilte Ireland has estimated that a Hard Brexit could cost tourism €390m and 10,700 jobs: “Britain is Ireland’s largest source market for visitors and is in decline with hotel occupancy levels down and additional supports must be offered to exposed businesses.”

He also urged the lifting of two of the planning restrictions for the new runway at Dublin Airport.