Malta wants the new Ryanair summer route from Cork to Valletta – which starts on April 4 – to go year-round.

And, with Irish visitor numbers to the Mediterranean island increasing this year, its tourism authority is also hoping to see a direct flight from Shannon to Valletta.

“Irish visitor numbers increased by 20pc from January to September this year, compared to the same time last year,” Peter Vella, Director for the British and Irish markets for the Malta Tourism Authority, told Travel Extra. 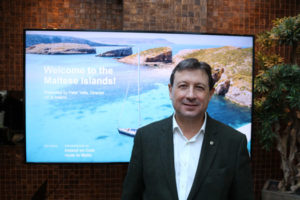 Mr Vella said that this outpaced its British market, where visitor numbers rose by 17pc.

He said he’s aiming to see the new seasonal route from Cork, launched in Leeside last week, to go year-round as the island attracts visitors at all times of the year, and is currently enjoying 21C temperatures.

“Seventy people were at the launch in Cork,” he said, “seven media and a huge turnout from the trade there.”

The airline flies 5w from Dublin to the island during the summer season, and 3w during the winter.