Trending
You are at:Home»Aviation»Michael O’Leary – we’ll be carrying 200 MILLION passengers every year; TAP in Lisbon to be added to connection deals with Aer Lingus and Norwegian

Ryanair CEO Michael O’Leary says the airline is on course to carry 130m passengers in 12 months – with the Irish carrier revealing that interlining agreements to transfer passengers have been reached with Aer Lingus and Norwegian.

“We’re growing very strongly. We’ll be reporting 120m passengers in the current year to March ’17 but that will be rising to 130m passengers to March ’18,” Mr O’Leary told a press conference in Dublin, ahead of next week’s full financial figures. He told the media that he will be in New York, not Dublin, when those figures are released.

He said full-year results will be in line with expectations, adding: “There’s an ever-widening gap between us and all airlines in Europe. We’re still lowering fares faster than any other airline but thankfully our costs are also declining faster than any other airline as well. We’re continuing to take down unit costs, ex fuel – EasyJet and others are still reporting unit costs still rising.”

And Mr O’Leary said the Ryanair business model of flying to smaller airports has evolved, under Chief Commercial Officer David O’Brien. “We’re operating at 207 airports but more than half of those airports are now primary airports. There’s been a sea change in our business in the last two or three years under David where primary airports in Germany, Spain and Italy are coming to Ryanair for growth as their incumbent carriers decline. 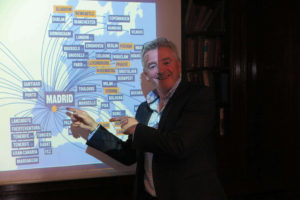 “We’re growing even faster than we had previously planned. We had originally planned to grow to 180m passengers by 2024 – we’ve now increased that to 200m passengers. I’m pleased to say Ireland is participating in that growth.  Today we are looking at record bookings into all of our Irish operations: 14.4m customers per annum, with those customers saving €1.5bn.”

One massive shift is from point-to-point flights between airports to the transfer market. It now has transfers on its own flights into and out of Rome’s Fiumicino Airport, and this week started offering long haul booking on Air Europa flights – but not transfers – on ryanair.com.

“We believe the connecting flights in Fiumicino is going very well. We’ve seen a big uptake on Italian domestic routes into Rome, connecting onwards… we think as we iron out the wrinkles in this in the next couple of months that it would be logical to begin then to offer connections at Dublin, certainly at Stansted in the next 12 months, and we’d also be looking at that as the basis at which we will offer third party connecting travel. Clearly with the Air Europa announcement yesterday it becomes important.

He added: “If that [Rome transfers] goes well we’re expecting to roll it out to other airlines in the short haul market.” Dublin and, more likely, Stansted could get the Ryanair to Ryanair transfer service in the next 12 months.

And he said of the Air Europa partnership: “It’s not a connecting service. We now have 20 long haul destinations out of Madrid. We’re working with Air Europa to have it on one ticket, with bags going straight through from Madrid airport. We have 50 short haul routes to and from Madrid, and we now have 20 long haul routes from Madrid. You can now fly with Ryanair into Madrid and onwards with Air Europa to Boston, New York, Miami, Caracas, Bogota, Salvador and all the other exciting places where Michael D Higgins tends to go to on his summer holidays.

“By close of play yesterday we had sold the first 100 long haul flights on Air Europa using the power of the ryanair.com network.”

Air Europa is a precursor to tie-ins with Aer Lingus and Norwegian to transfers short haul Ryanair passengers onto transatlantic routes. Talks are also ongoing with TAP of Portugal.

David O’Brien said: “We have an [interlining]agreement, we’re just in the technical stages of trying to make it work. We have learned not to predict when an IT programme is going to end. Now we have two companies involved [norwegian and Aer Lingus].”

But he played down the significance at the moment of the move: “We’re flying at around 94pc load factor so it’s low on our priorities … What’s interesting about the connecting proposition over time is how disruptive it can be. We’ve identified in Bergamo [near Milan]that even on our own network that 300 new routes could be created in an airport that practically didn’t exist 15 years ago. That’s not gone unnoticed by other long haul airlines who are talking to us. … [for them]it’s a just add water, instant hub in effect what’s going on in Frankfurt or Amsterdam.”

Video highlights from the conference: