Trending
You are at:Home»Aviation»Trump slump and Brexit blamed as profits fall by 82pc at Emirates

The last few months have been turbulent for Middle Eastern carriers in particular, with the Muslim-majority nation rulings plus the laptop ban imposed by the new US administration under President Donald Trump. 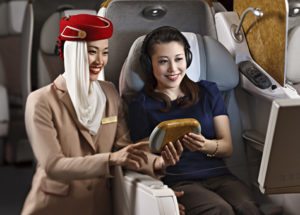 The chairman said the airline’s business capabilities (it carried a record 56.1m passengers) and brand had “helped us to weather the destabilising events which have impacted travel demand during the year”.

He said the airline had been hit by Britain’s vote to leave the EU, terror attacks in Europe, new US policies on air travel to the US, currency devaluation and a sluggish oil and gas industry.

“Over the years, we have invested to build our business capabilities and brand reputation. We now reap the benefits as these strong foundations have helped us to weather the destabilising events which have impacted travel demand during the year – from the Brexit vote to Europe’s immigration challenges and terror attacks, from the new policies impacting air travel into the US, to currency devaluation and funds repatriation issues in parts of Africa, and the continued knock-on effect of a sluggish oil and gas industry on business confidence and travel demand,” he said.

Emirates recorded its 29th consecutive year of growth, and reported stable revenue at US$ 23.2bn, after a US$ 572m hit due to unfavourable currency exchange. But its operating costs rose 8pc over the previous financial year as a slightly lower cost of jet fuel was offset by the rising expense of a capacity increase to bring fuel costs up by 6pc.

Meanwhile, in 2016-17, the Group collectively invested US$ 3.7bnin new aircraft and equipment, the acquisition of companies, modern facilities, the latest technologies, and staff initiatives.