Trending
You are at:Home»Aviation»War of words as Ryanair responds to one-day strike warning on December 20 notice by pilots' union

Ryanair has issued a statement saying it will “face down IALPA threatened strike” following a letter sent to airline boss Michael O’Leary by the Irish Air Line Pilots’ Association union.

Ryanair claimed it welcomed the strike notice as it “conclusively proves that it is about union recognition for the Aer Lingus pilots union IALPA and not about pay and conditions for Ryanair pilots who in Dublin can earn between €150,000 to €190,000 p.a. for working a 5on/4off roster (a double bank holiday weekend every week), and have been offered a 20pc pay increase (at a time when IALPA are recommending a 3pc increase to Aer Lingus pilots).”

The threatened strike would be for one day, commencing a minute after midnight on Wednesday, December 20. The airline said it “will deal with any such disruptions if, or when they arise”. 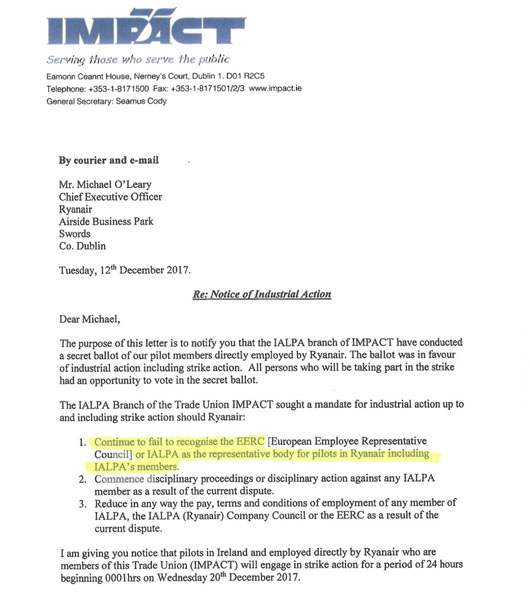 It added that it apoligised sincerely to customers for any upset or worry this threatened action “by less than 28pc of our Dublin pilots may cause them over the coming days”.
Trade union IMPACT, of which IALPA is a branch member, said that Irish-based directly-employed pilots, mostly captains, will withdraw their labour in an action that IMPACT says will either disrupt flights or generate substantial costs to the airline. The pilots backed industrial action by a margin of 94pc to 6pc in secret ballots conducted over the last week.
IALPA wrote to Michael O’Leary on Tuesdsay, December 12, saying: “The IALPA Branch of the Trade Union IMPACT sought a mandate for industrial action up to and including strike action should Ryanair: continue to fail to recognise the EERC [European Employee Representative Council] or IALPA as the representative body for pilots in Ryanair including IALPA’s members; commence disciplinary proceedings or disciplinary action against any IALPA member as a result of the current dispute; reduce in any way the pay, terms and conditions of employment of any member of IALPA, the IALPA (Ryanair) Company Council or the EERC as a lesult of the current dispute”.
Written by Angela Kirk of trade union IMPACT, it added: “I am giving you notice that pilots in Ireland and employed directly by Ryanair who are members of this Trade Union (IMPACT) will engage in strike action for a period of 24 hours beginning 0001hrs on Wednesday 20th December 2017.” The union said the vote was by secret balllt.

Ryanair hit back, saying it was “surprised that IALPA has threatened to disrupt Christmas week travel when IALPA’s own numbers confirm that it has the support of less than 28pc of Ryanair’s over 300 Dublin pilots and when Ryanair’s Belfast, Cork and Shannon bases have already agreed these 20pc pay deals. While some disruption may occur, Ryanair believes this will largely be confined to a small group of pilots who are working their notice and will shortly leave Ryanair.”

It warned that that any Dublin pilots who participate in this industrial action will be in breach of the Dublin pilots base agreement and they will lose those agreed benefits which arise from dealing directly with Ryanair, including the 5on/4off rosters, certain pay benefits and promotion opportunities until such time as they chose to return to the 25 year established practice of dealing directly with Ryanair.

It claimed that its “very well paid” pilots are “free to join unions”, but like every other multinational, Ryanair is also free – under both Irish & EU law – to decline to engage with (competitor pilot) unions. Ryanair will not recognise an Aer Lingus pilot union, no matter how often or how long this tiny minority (earning between €150,000 to €190,000 p.a.) try to disrupt our flights or our customers plans during Christmas week.