Trending
You are at:Home»Aviation»Bonderman support falls from 89pc to 70.5pc at Ryanair AGM

David Bonderman was re-elected Ryanair chairman with 70.5pc of votes, compared to 89pc who voted in favour last year. Bonderman, who runs investment fund TPG, resigned from the board of Uber last year following comments that were widely seen as offensive to women.  A number of shareholders in the lead up to the vote publicly called for Chairman David Bonderman, 75, to step down, he was re-elected with 70.5 percent of votes, a significant fall from the 89 percent he received last year. Bonderman has chaired the company since 1996.

Speaking after the AGM, Mr Bonderman said he would reserve his position on how long he intended staying in the Ryanair chair. Michael O’Leary maintained that Mr Bonderman stayed in the role “as a favour to us”. “if we could encourage him to continue to chair the company for another couple of years, I personally would encourage him to do so,” Mr O’Leary said. “I don’t think he will.”    Ryanair pays him fees of €100,000 a year, but the chairman owns 7.5m of its shares, worth about €100m.

Kyran McLaughlin the long-standing “Senior Independent Director” was re-elected with 66.9pc of the votes, and so were Michael Cawley with 81.9pc and Howard Millar with 78.5pc at Thursday’s AGM.

Michael O’Leary was re-elected by 98.5pc, compared to 99pc support in the previous two years.  Media are normally excluded from the meeting, but this was changed on the day and members of the media were allowed after reporters from the Irish Independent, RTÉ and the Financial Times accessed the event as shareholder proxies. Mr O’Leary said he had been asked by the company’s remuneration committee to extend his contract beyond 2019 and that he intended to do so.

The usual post AGM media briefing was restored, having also been cancelled. Michael O’Leary said he was in discussion with the board about a possible two or three-year contract with a 12-month rolling contract to follow “I am not sure whether I want to sign up to another five years, that would take me up to 62. I’m not sure Mrs. O’Leary would be happy.”

Alison Kennedy of Aberdeen who have an 0.9pc stake in Ryanair, said the length of time both Bonderman and Kyran McLaughlin have been on the board suggests a lack of focus on board succession planning; excessive tenure also calls into question an individual’s independence and objectivity.”

Michael O’Leary told the AGM Irish tax law required Ryanair to use Irish contracts, as staff worked on aircraft registered here and operated by a company based here.

Ryanair Sun (Poland) plans to gradually take over scheduled charter operations of Ryanair in Poland, with a planned fleet of 20 aircraft. Michael O’Leary said: “we have direct local contracts available with Ryanair Sun at all of our Polish bases. With a current fleet of 5 B737-800 Aircraft and expansion in summer 2019 Ryanair Sun will deliver the best in schedule and class charter services”.

Emer Daly and Róisín Brennan joined the Board. Charlie McCreevy and Declan McKeon chose not to seek re-election at the AGM. A year of what Reuters calls management mis-steps that have seen the share price fall 17 percent. 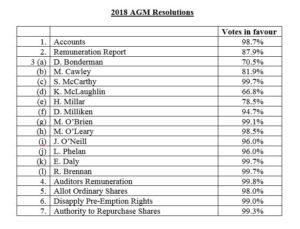