The European Investment Bank – the EU’s non-profit lending body – is providing €155m to finance the WB Yeats and a larger new passenger vessel, which will be the world’s biggest, for Irish Ferries.

Both parties said that the two ferries will increase passenger and cargo capacity on routes to Ireland, replace older and smaller vessels and significantly reduce greenhouse emissions.

The new ferries are expected to be used on both the Dublin-Holyhead and Dublin-Cherbourg routes to reflect demand for a greater choice of services from Ireland to Britain and direct to continental Europe as concerns of a hard Brexit grow. 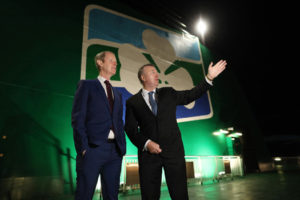 The announcement was made as the WB Yeats ferry made its maiden voyage from Dublin to Holyhead.

The largest ever EIB support for Irish shipping was announced during a visit by Irishman Andrew McDowell, European Investment Bank Vice President, and Eamonn Rothwell, CEO of Irish Continental Group, the parent company of Irish Ferries.

Due for delivery during 2020, the second ship will be the largest cruise ferry in the world in terms of vehicle capacity and provide Irish Ferries with an effective 50pc increase in peak freight capacity.

Eamonn Rothwell, CEO, ICG, said: “Significant new investment is essential to expand the Irish Ferries fleet and better serve our customers’ increased demand for passenger and freight transport. We were delighted to take delivery of the superb W.B Yeats in December.  The ship is the next level in terms of the experience it offers our customers. After operating on the Irish Sea, the WB Yeats will move to service the busy Dublin Cherbourg route in the coming months.”

Andrew McDowell, European Investment Bank Vice President, said: “Shipping connections are crucial for Ireland. The €155m long-term EIB loans will support €309m of new investment in best in class vessels that will serve Irish routes for years to come. The new WB Yeats, on its maiden voyage from Dublin today, together with the second vessel will transform freight capacity and passenger travel from Ireland to the UK and continental Europe.”