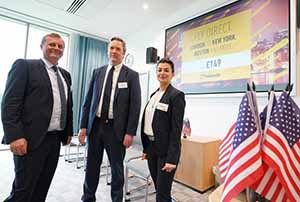 Icelandic-Danish airline Primera Air has gone into administration, blaming late deliveries of Airbus A321, inability to secure long term financing and a range of operational problems caused by a B757 wet lease hire-in.

The airline spent an unexpected €10m on a rebuild of a B738 last year due to extensive corrosion and €20m for leases and associated costs incurred early in the season caused by late A321NEO deliveries.

The final flight to land was PF596 from Málaga to Copenhagen. Some passengers learned that the airline was to close while they were queuing to board the aircraft. As with all airline failures, passengers are not accorded the same protection as those who booked through a travel agent.

Most of the airline’s business was Scandinavian holidaymakers to to 40 destinations in the Mediterranean and Middle East such as Spain, Greece, Italy, Egypt and Turkey. The airline announced services from London (Stansted), Paris and Birmingham to cities including Newark, Boston and Toronto, some of which had begun. Primera planned new transatlantic operations planned from Brussels, Berlin, Frankfurt and Madrid, and an expanded number of destinations including Washington and Montreal.

The airline is part of the Primera group which purchased Gillian Bowler‘s and Harry Sydner‘s Budget Travel from TUI in June 2007 in return for the EU Competition Commission granting approval for TUI’s merger with First Choice. Primera Air was used for charter operations out of Dublin during that period.

Budget subsequently failed in 2009 for reasons which are contested, but include a lack of understanding of the Irish bonding system by the then Icelandic based management led by Andri Mar Engolfsson. The brand was sold to Liam Lonergan‘s Club Travel and continued to operate.

It told passengers: “On behalf of Primera Air team, we would like to thank you for your loyalty. On this sad day we are saying Goodbye to all of you.”

The airline started in 2004 and its Copenhagen subsidiary emerged in 2009. Initially, Primera Air operated charter flights for major Scandinavian tour operators, but gradually started selling surplus seats as “flight-only” tickets on some of the fixed charter flights in 2013. It then launched an extremely ambitious programme of flights from London, Paris and Stockholm.

At the time of its failure, Primera Air was announcing an ambitious number of new routes for 2019, such as Brussels, Frankfurt, Madrid and Berlin to New York, Boston, Washington, Toronto and Montreal using Boeing 737 MAX 9, apparently in a bid to get cash coming in. Just last fortnight Primera announced new routes from Frankfurt to JFK (daily), Boston (4w), Toronto (daily) and Montreal (3w) with B737 MAX 9 starting Jun/Jul 2019.

The Copenhagen based airline  Primera Air Scandinavia has a fleet of five Airbus A321neo, two of which are leased from GECAS and one from Aviation Capital Group, and three Boeing 737-800, one each leased from Aercap and Cmb Financial, with 22 aircraft on order. A further two B373LR were due to be leased from Aercap.

Latvian based Primera Air Nordic, spun off in 2014, has a fleet of seven B737NG, three each leased from Aercap and GECAS and one from Babcock & Brown Aircraft Management.

CEO of both airlines Hrafn Thorgeirsson confirmed orders for 18 long range next generation aircraft in the coming years to support its low cost long haul international route development strategy, including two A321LR, an A321neo, a Boeing 737-800 and 18 Boeing 737 MAX 9 aircraft.

The collapse leaves an estimated 2,500-5,000 trans Atlantic passengers stranded and tens of thousands more seriously out of pocket. Stansted said on Monday that travellers due to fly with the airline should not travel to the airport. Air crews that are stranded down route are paying out of their own pockets to get themselves home.

Last weekend it was confirmed OY-PAB, Primer’a sixth Airbus A321neo to be delivered would not arrive due to an unspecified issue with the fuselage in the factory. It was originally supposed to be delivered in April 2018.
The airline had negotiated an additional A321neoLR instead.

The EU261 claim bill has also been suggested as a factor which brought the airline down.

With a great regret, we must inform you that Primera Air will cease all operations on the midnight of October 1st, 2018 and enter administration process, after 14 years of operations.

This is a sad day for all the employees and passengers of Primera Air. The company has been working relentlessly during the last months to secure the long-term financing of the airline. Not being able to reach an agreement with our bank for a bridge financing, we had no other choice than filing for bankruptcy.

During the last 2 years, several unforeseen misfortunate events severely affected the financial standing of Primera Air. In 2017, the company lost one aircraft from operations due to severe corrosion problems and had to bear the total cost of rebuilding, resulted in a loss of more than 10 million euros. 2018 began with a fantastic start of our low-cost long-haul project with a brand-new Airbus 321neo fleet, however, due to severe delays of aircraft deliveries this beginning ended up being rocky and incredibly problematic: operational issues, cancelations of number of flights, loss of revenues are just a few to mention. In addition, to fulfill our obligations in front of passengers, Primera Air leased in aircraft and beared additional costs of over 20 million euros.

Weighting the potential losses due to future delivery delays, and the added exposure to our partners and lessors, and bearing in mind the difficult environment that airlines are facing now due to low prices and high fuel costs, we have decided to cease operations now, where it will have a smaller effect on our clients, due to the timing of the year, rather than increasing the exposure. Without additional financing, we do not see any possibility to continue our operations.

The board of Primera Air