Trending
You are at:Home»Aviation»Shannon to lose 5pc of income as Kuwait stopover ends 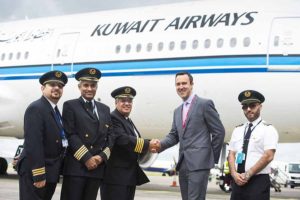 Shannon Airport is set to lose 5pc of its income as Kuwait airways’ stopovers en route to the US are set to end.

Kuwait and the US are set to resume direct air flights, after security concerns caused them to be halted in 2016. The stopover arrangement was initially meant to be for a six month period only. Kuwait’s chairman of the Directorate General of Civil Aviation, Sheikh Salman Sabah Al-Salem Al-Humoud, has confirmed direct flights will resume.

The flight between Kuwait and JFK via Shannon allowed passenger and baggage screening but did not pick up any passengers. Passengers were on the ground for up to two-and-a-half hours of their 13-hour flight.

A spokesperson for Shannon Airport said “Shannon’s reputation for efficient and quick handling of transit aircraft, from the smallest to the largest was the reason why Shannon was selected back in 2016 by Kuwait Airways as a temporary transit stop on their Kuwait to JFK service. We would like to thank Kuwait Airlines for using Shannon Airport over the last two-and-a-half years.”