A Spanish ferry company is set to buy the high-speed craft Jonathan Swift from Irish Ferries‘ parent company ICG.
ICG said it has entered into a Memorandum of Agreement for the sale to Balearia Eurolineas Maritimas, which operates ferry services from Dénia, Valencia and Barcelona to the Balearic Islands, and from Almeria, Malaga and Algeciras to Morocco. Its routes in the US connect Florida to the Bahama Islands.
The price of €15.5m, less brokers’ commission, is payable in cash on delivery less a 10pc deposit to be held by a third party until the deal is done. The vessel is to be delivered by the end of April 2018.
The Jonathan Swift was delivered to ICG in 1999 and has since operated on the company’s Dublin – Holyhead route. This vessel will be replaced by Westpac Express, a high-speed vessel built in 2001 that was bought by ICG in 2016. 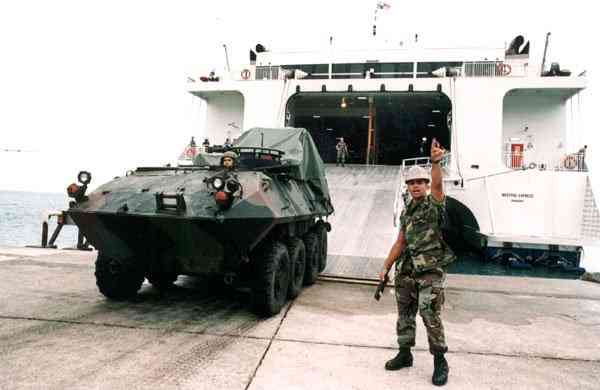 Irish Ferries’ Westpac Express, which has been used in US Navy exercises and humanitarian missions, and which will replace Jonathan Swift

Westpac Express has had a colourful history – it’s been used by the US Navy for military exercises.
In March 2011, it was also deployed as part of the US response to the devasting Japanese earthquake and tsunami. Following the mercy mission, the ship’s crew were presented with United States Merchant Marine Medals for Outstanding Achievement at a ceremony on board the ship in Yokohama, outside Tokyo.
The ship, which was recently redelivered to ICG following 20 months on external charter back to the US Navy, is currently undergoing a refurbishment programme to bring her up to Irish Ferries passenger service standards.
The “Jonathan Swift” was delivered to the group in 1999 at a cost of €38.8m. The disposal will generate a book profit for ICG of approximately €14m, ICG said, adding that “the proceeds will be used for general corporate purposes”.
It’s the latest big move in the ferries sector, following the float-out of new Irish Ferries vessel WB Yeats in Germany, and the decision by Brittany Ferries to deploy chartered ship Connemara on a new route from Cork to Santander in Spain.
The following two tabs change content below.