Trending
You are at:Home»Ireland inbound»The COST of Brexit to Irish tourism: 3 lost years, 1m visitors and €300m in revenue, and it has not even happened yet 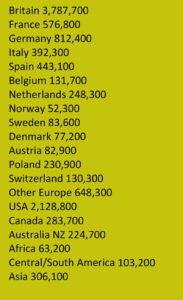 The annual tourism figures from the Central Statistics Office show just how disastrous the Brexit episode has been for Irish tourism.

Th annual figure for Britain is still 3.5pc behind pre-Brexit referendum, even with that tiny growth in 2018 and 2019. Prior to that we saw annual growth of 6pc, 8pc, 10pc and 12pc from Britain.

In the three pre-referendum years to 2016, Irish inbound tourism from Britain increased by 37pc. In the three years since, they declined by 3.5pc.

A sustained increase on the same level would have delivered a million extra British tourists and €300m in extra revenue,

The projection is not fanciful. Europe increased by 25pc over the past three years. North America by 57pc.