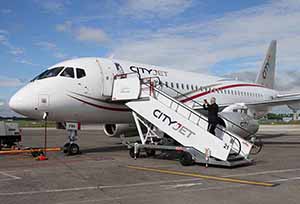 Brussels Airlines, which has used four of CityJet’s SSJ100s on some services since April 2017 is at the request-for-proposals stage of determining who will be capacity provider when the contract expires in March 2019.

Brussels Airlines said an aircraft of the SSJ100’s size is ideal for some of its destinations that are unsuitable for larger aircraft, or where it wishes to offer more flights per day than would be possible with a larger aircraft, such as the A320 but it is still a very young aircraft and it has had some childhood diseases.’ Every time such teething problems cropped up, it took longer to get the aircraft back into service than it would have been with other types. This has affected reliability figures, she said.  She added that the Sukhoi was a good aircraft, but one whose youth had not been in its favour.

CityJet COO Cathal O’Connell said that to talk about his company’s plans for its SSJ100s would be “commercially sensitive.”