Trending
You are at:Home»Aviation»Emirates celebrates 'stellar' year in Ireland and points to trend for higher-end holidays with trade

Emirates’ Country Manager Enda Corneille has said that Ireland has been a “stellar” performer for the airline.

He said that, despite fierce competition in the eastbound market – and with Cathay Pacific and Hainan launching services in June – the outlook is good for the Dubai-based carrier in the Irish market. 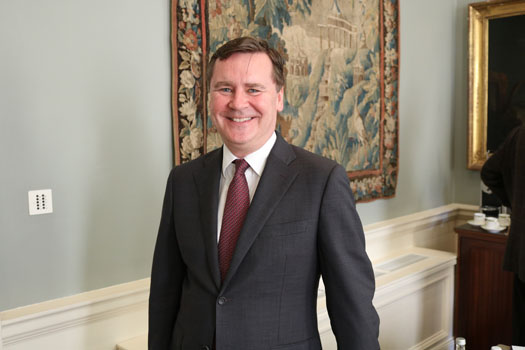 Enda Corneille, Country Manager for Ireland, Emirates, at the airline’s trading update in teh Merrion Hotel, Dublin, May 23, 2018

“We may look at increasing frequency into next year but at the moment it’s about nudging that seat factor higher. It’s at 80 but I think we can get to 85,” he told Travel Extra.

“We’ve had good results for the year – stellar results from Ireland in a very competitive market which we’ve been able to get our head above water on. If I look out to the future over the next five or six months our advance bookings are 8 to 10 points ahead of last year,” he said.

“The other main USP we have over our competitors is a local team. We’ve moved our office to Dublin Airport so we’ve sales people and support in the office so certainly for the travel trade and customers to have a personal touch really counts.”

And he said trade partnerships in general are healthy, with big demand in the honeymoon and VFR markets in particular. “In terms of where we see trends obviously Australia is huge,” he said. “Cities like Bangkok are very big markets for us and the honeymoon market is getting bigger all the time as the Irish economy strengthens,” he added.

“We’re finding now, and by talking to the operators, that the honeymoon used to be something that was bought by the couple when everything else was bought. You either went to the Maldives or went to Kelly’s in Rosslare.

“Now the honeymoon is one of the first things that’s selected and we see huge demand into the Seychelles, into Mauritius, which has come back after all the tragedy a number of years ago, the Maldives, Indian Ocean, and that double-stop option that used to be something four or five years has come back – South Africa and Mauritius.”

He said that the traffic has been boosted by people who “want to travel in business class so we’ve brought out very competitive business class tour operator rates to encourage that kind of traffic.”

He said another niche market is the Vietnam and Thailand area for adventure-seekers, revealing “there are huge loads into Hanoi and Saigon and he new route announced this year into Phnom Penh in Cambodia. People are doing that double trip – going into Phnom Penh and coming out of Saigon and going through the Angkor Wat area – places that just weren’t as accessible.

“Dubai is still our number 1 and a couple of weeks ago our sister company Emirates Holidays launched in Ireland so they’ll be focusing on Dubai and using their expertise and enormous ground product to drive that market for us.”