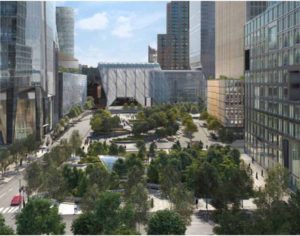 When open in 2018, the restaurant collection at Hudson Yards will feature 12 luxury restaurants in its first phase, including a steakhouse and American grill by chef Thomas Keller of Per Se and the French Laundry.

Keller will also be helping to select the 11 other restaurants going into the retail complex, along with developer and restaurateur Kenneth Himmel, of Related Urban.

Speaking at IPW 2016 in New Orleans, Stacey Federer said on behalf of Hudson Yards: our vision for Hudson Yards is that it is the most romantic lovey-duvvy neighbourhood in New York City.

Wedged between Chelsea and Hell’s Kitchen, Hudson Yards will be spread over 11 hectares.

The development by real-estate firm Related Companies is the largest real estate development in US history. In its scale, the Hudson Yards exceeds the Freedom Tower and Brooklyn’s Barclays Center.

Moreover, three-quarters of the site is not on land, but on elevated platforms on top of one of the world’s busiest railroad yards over which a platform was erected, while trains keep running, uninterrupted, below. Among the highlights of the development will be the third section of the High Line Park, running through the base of one of its towers. The first two elevated sections of the 1930s freight railway line, it strecthes from Gansevoort Street in the Meatpacking District to West 30th, were turned into a scenic walkway in 2009, complete with artworks, wild grasses and flowers, viewing spots and a claimed 5m annual visits.

Hudson Yards will consist of five office towers, a cultural centre, 5,000 apartments, 100 shops including the city’s first Neiman Marcus, 20 eateries, a hotel (Four Points by Sheraton Manhattan Hudson Yards), a new observation deck and 5.6 hectares of public space. When complete, the site will include more than 1.58m million square metres of commercial and residential space.

Ten Hudson Yards opened last year. The first phase is due to be finished by 2018. The residential Western Yards will be opened by 2024. The 80-storey 30 Hudson Yards (2017-18), will house Time Warner (HBO and CNN will move their studios here) and feature the highest outdoor observation deck in New York City.

The Culture Shed will open by 2018 on a public square that joins on to the Hudson Park and Boulevard, and will have an unusual design feature that allows it to be expanded. The Culture Shed can be rolled out on wheels that are two metres high (the developers say “nested”) with walls that go down like window blinds and can be closed and climate controlled.

Galleries will host pop-up exhibitions, while New York’s Fashion Week will move from the Lincoln Centre. The Whitney art gallery opened last year (see Travel Extra review) by the High Line’s southern terminus and the US$30m Hudson Park and Boulevard was initiated. Tourists can now walk from Gansevoort Street to Times Square through green space, a new network of parks in Manhattan meaning.

Nearby, at Ninth Avenue and 33rd Street, another mixed-use project broke ground in 2012. Continuing the trend, the US$4.5bn Manhattan West project (website) will be built over the train tracks that connect to Penn station, on top of which will be two office towers, one apartment block and a plaza by 2020.

The final ten restaurants for the project have not been confirmed, although Spanish chef José Andrés and Greek seafood chef Costas Spiliadis will reportedly be adding outposts to the collection.

A mile and a half of Manhattan that was dead and dangerous in the 1970s, with piers collapsing into the river, has been brought back to life. Stacey Feder says: The former deadlands of mid Manhattgan is growing at five times the rate of the rest of Manhattan and in the middle you have train tracks. Hudson Yards is going to bridge together the West Side, Chelsea’s hundreds of galleries, the Culture Shed in Hudson Yards at one end of the High Line, and the new Whitney at the other, so you are going to have this cultural Mecca.”