Trending
You are at:Home»Aviation»Software was to blame for ATC problem says Irish Aviation Authority 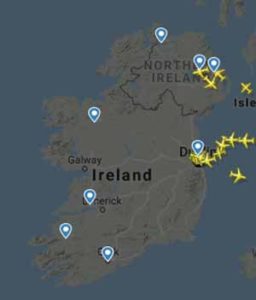 The Irish Aviation Authority said that an “irregular software occurrence” was to blame for the technical issues at Ireland’s primary Air Traffic Control system in Ballycasey, Co Clare.

The Air Traffic Control system in Ballycasey, which services Shannon Airport, Cork Airport and transatlantic overflights, failed on the night of Tue/Wed and the region was closed with flights for Shannon and Cork diverted to Dublin. As part of planned contingency, the IAA moved to its back-up systems and after about two hours the local flight restrictions were lifted.

The IAA now says the issue was an irregular software occurrence and that during Wed/Thu night it transferred service back to its primary system, which has been restored to full capacity.  On Wednesday, it said there was nothing to suggest that hacking or cyber-crime was involved. The technical issue which occurred was not a radar issue.  Full radar coverage was maintained at all times.  “A comprehensive testing and safety analysis was carried out to ensure that the system was fit to return to operations.  The outcome of this was positive and accordingly operations were transferred back to the primary ATC system”.

It said that the issue – which affected flights into and out of Shannon and Cork on Tuesday, October 2, “has been identified and isolated” after examination by the system’s manufacturer and technical experts.

In a written statement the IAA said it has confirmed that following a thorough investigation of a technical issue on our primary Air Traffic Control (ATC) system in Ballycasey, County Clare, (which occurred on Tuesday the 2nd ofOctober) the issue has been identified and isolated. The issue was an irregular software occurrence. Over the course of last night (3rd – 4th October) the IAA transferred service back to its primary system, which has been restored to full capacity.  The IAA continues to provide a full service to airlines and passengers. Technical experts and the system manufacturer worked tirelessly to identify the issue, research, isolate and to resolve the matter.

When this was completed, a comprehensive testing and safety analysis was carried out to ensure that the system was fit to return to operations.  The outcome of this was positive and accordingly operations were transferred back to the primary ATC system last night.

When the technical issue occurred on Tuesday evening, we are satisfied that the back-up system and contingency planning worked as required.  This ensured that we restored full service in a safe and timely manner and disruption to aircraft was minimal.

The IAA continues to invest in its state-of-the-art air traffic management system and in the development of our staff, to deliver a world-class service to our airline customers.

We wish to clarify some issues reported in some media outlets: