Trending
You are at:Home»Aviation»Thai cancels ALL flights to Europe as airlines count cost of India-Pakistan conflict 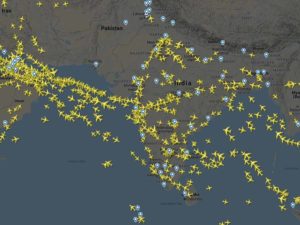 Emirates, Qatar Airways, Etihad, flydubai, Gulf Air, SriLankan Airlines, and Air Canada on have suspended services to Pakistan and some parts of India.

The popular EK622 and EK624 flights from Dubai to Lahore are not bookable until Monday.

Thai Airways has suspended all its flights destined for Europe. Airlines such as Singapore Airlines, Finnair, British Airways, Aeroflot, and Air India were forced to reroute flights. Singapore Airlines’ Europe-bound flights would need to make refuelling stops, the airline said in a statement.

Pakistan air space remains closed with flight operations at Lahore, Multan, Faisalabad, Sialkot and Islamabad airports suspended. A passenger aircraft was stopped from taking off from Bacha Khan International Airport in Peshawar on the orders of Civil Aviation Authority.

India shut six airports in the northern part of the country temporarily, Amritsar, Pathankot, Jammu, Leh and Chandigarh, leading to dozens of domestic flight cancellations. Operations at the Indian airports have now resumed.

Some flights were routed through Mumbai on India’s western coast, so they could head further south and avoid Pakistan airspace.

Qatar Airways said in a statement it has temporarily suspended flights to eight cities in India and Pakistan “due to the ongoing situation on the India-Pakistan border” and that its flights routed over the India-Pakistan airspace may be delayed due to rerouting in the area.

Bahrain’s Gulf Air said it had suspended all flights to and from Pakistan due to the closure of the airspace while low-cost carrier flydubai said it is reviewing its schedule.

All flights from Kabul to India have been cancelled until further notice while India’s state-run carrier Air India has cancelled its flights until the first week of March.

British Airways said it is monitoring the situation closely.

Most of the traffic destined for Bangkok and Singapore will have to fly over Iran and then possibly take a detour. Airlines cannot overfly China.